sails and a propeller

HMS Erebus was a Royal Navy exploration ship and the flagship of the Franklin expedition.

In 1839, the Erebus and Terror were selected to be used on James Clark Ross's voyage to Antarctica. The two ships performed several voyages to Antarctica before going back to England in 1843.

In the spring of 1845, the Erebus and Terror were selected for use in the Franklin expedition, with the Erebus being made flagship. The two ships were modified to include a propeller and a steam engine from the London and Greenwich Railway. The two ships left Greenhithe in May 1845, and were last seen by whalers off the coast of Baffin Bay in august of that year. In the late fall or early winter of 1845, Erebus and Terror circumnavigated Cornwallis Island before anchoring at Beechey Island. The two ships left sometime in the spring of 1846. On September 12th, 1846, the Erebus and Terror became stuck in the ice of King William Island. On April 22nd, 1848, the decision was made to desert the ships and march south, however Inuit reported seeing the two ships steaming along the coast of King William Island in the spring or summer of that year. In the early 1850's a small group of Inuit boarded the now abandoned Erebus in Wilmot and Crampton Bay. They discovered that everything had been left intact and also discovered a decomposing body aboard the ship. The Erebus soon sank when the ice melted.

Discovery Of The Wreck[]

On September 2nd, 2014, the wreck of one of Franklin ships was discovered in Wilmot and Crampton Bay. In October of that year, it was confirmed to be the wreck of the Erebus. Almost immediately, divers began work on recovering artifacts from the Erebus such as the bell, wheel, a cannon and many others.

Status of the Wreck[]

In September 2018, Parks Canada announced that Erebus' condition had deteriorated significantly, with a 14-meter section of the upper deck detaching from the ship, flipping over, and moving towards the stern. Parks Canada attributed the deterioration to "an upwards buoyant force acting on the decking combined with storm swell in relatively shallow water". 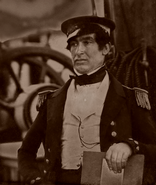 A portrait of Lt. Le Vesconte on the Erebus. (This is currently the only known photograph of either of Franklin's ships) 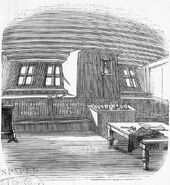 The great cabin on Erebus 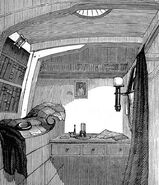 James Fitzjames' cabin on the Erebus

An officer's cabin inside the wreck

A map of the Erebus' wreck site

A replica of the Erebus built for AMC's The Terror, now on display at the Cinemaqua theme park in Kisvárda Hungary
Community content is available under CC-BY-SA unless otherwise noted.
Advertisement